Looking Back at TINO's "Past Due"

I first linked up with TINO in October of 2019 to begin recording what would become Past Due. I wasn’t familiar with TINO or his music before meeting him, but I instantly became a fan after that first studio session. That first session he knocked out four or five songs, many of them in just one take. His bars really impressed me, but his delivery and passion are what blew me away.

We recorded the whole project using our Neumann TLM107. The rest of the recording process continued through February until we had a finished, polished series of recordings that were ready for mixing. TINO told me to take as much time as I needed with the project for mixing because he didn’t want anything to be rushed. 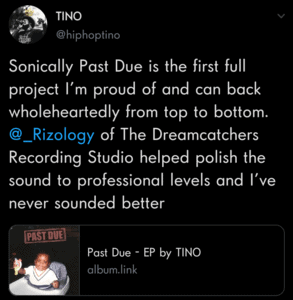 The project features several extremely talented producers, one of which being Printmatic, who stopped by one of the studio sessions to advise Tino on his recording process and also just enjoy the music. Here’s what Tino had to say about the recording process

Past Due is by far one of my favorite projects that I’ve ever been able to work on. It’s always easy to work with someone as professional, talented, and driven as TINO. If you ever have a chance to see him perform, you should purchase the tickets immediately, before they are too expensive.

The tape features a variety of moods and dynamics which keeps the flow moving in a very pleasing way. From anecdotes from TINO’s childhood growing up in Cleveland, self-realizations he learned from corporate America, or braggadocious bars which cement his place in the culture, Past Due is full of introspective moments that provide a deep perspective into the mind and life of TINO.

Check out Past Due, available wherever you like to listen to music now!